What is Low Self Esteem?

Parents having unrealistic standards;
Symptomatic punishment, neglect or abuse;
Lack of positive reinforcement, warmth, affection;
Being different in some way to peers/ family;
Bullying;
Parents with mental health difficulties that may impact on parental abilities.
Negative self-beliefs can also be developed later in life by negative and traumatic events, or a series of events, such as abusive relationships and bullying.
Reinforcement and maintenance of low self-esteem

These negative beliefs create a foundation for judgements we make about ourselves as people. The problem with beliefs developed in childhood is that they are formed from a child’s-eye view of the world. A lack of reason and understanding of experiences that we have a children can then cement negative beliefs as appearing perfectly true.

These beliefs may then be taken into adulthood and impact on our view of ourselves, others and the world. Even though they may not have any logical basis in the adult’s life experiences. For example, a person may have developed the belief that they are not good enough as a person due to childhood experiences. This view may continue to cause distress into adulthood despite life experiences which have meaning to the contrary.

These negative core beliefs are maintained by distorted thinking. A person with negative core beliefs about themselves are often well trained at noticing anything that reinforces their view point, whilst discounting evidence that is contradictory. In addition, a person may choose to interpret events in a way that reinforces negative core beliefs. For example, a person who achieves a promotion at work might think their bosses felt obliged to give them the new role and that the decision was not based on their abilities, which remain ‘not good enough’. This might be believed even though it is not rational and does not fit with the reality that they were selected over others for this new role!
Distorted thinking works to reinforce and maintain beliefs that underpin low self-esteem. Therefore, memories of life can be unfairly biased or coloured with negative beliefs, which in turn keeps the negative beliefs alive.

At iRise Psychology, we generally treat low self-esteem with CBT. Cognitive behaviour therapy aims to highlight negative beliefs, their origins and what maintains them. This model has an excellent evidence base and is recommended in the NICE (National Institute for Health and Care Excellence) guidelines and is used as a preferred treatment throughout the NHS. Therapy would then focus on developing strategies to help a more realistic and balanced view of themselves as a person to emerge.

We always work collaboratively with our clients to provide the best results to therapy. Our service is confidential and we aim to foster a safe environment where you can feel positive and empowered.

Call to find out More 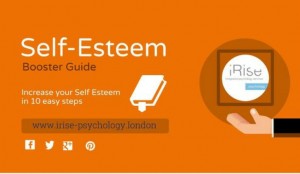